US lashes out at North Korea's 'horrendous' human rights record

The United States lashed out Wednesday at North Korea's "horrendous" human rights record and said the international community must be "blunt" to make the hardline communist state change its ways.

The strong words by Washington came as North Korea prepared to start disabling Thursday its nuclear facilities for the first time as part of a multilateral effort.

"The human rights situation for North Koreans in North Korea and those who have fled (to China) has not improved markedly, it remains horrendous," said Mark Lagon, the State Department's director of the office to monitor and combat human trafficking. "If you want a prescription of what we should do from this point forward -- 'we must be frank and blunt with the North Korean authorities about their human rights record, which is abysmal," Lagon said.

Posted by Grant Montgomery at 9:44 PM No comments:

How North Koreans-turned-South Korean stand out

Based on this peculiar ID pattern, many North Korean settlers are often denied a Chinese entry visa. At the same time, they are also subject to employment discrimination from South Korean companies that avoid hiring them because of their lack of job skills and cultural differences.

The South Korean government abolished the problematic system in June and initiated a new one in which North Koreans receive social-security numbers that show the place of their choice of residence, not Ansung.

The remedy, however, is still not perfect. Those who received their social-security numbers before the launch of the new system still have to use their old ID, and it's impossible for them to change their ID numbers because doing so would require a change of the relevant law and parliamentary approval.

[Excerpt of an article by Sunny Lee, The Asian Times]

Posted by Grant Montgomery at 1:21 AM No comments:

South Korea's Foreign Ministry office filed an official protest against the treatment of South Korean diplomats by Chinese police following a tussle during the arrest of North Korean defectors, reports the Korea Daily.

Four individuals were found hiding in the restroom of a South Korean school in Beijing, where they were seeking asylum and safe passage to South Korea.

Thirty police officers arrived on the scene, blocking officials from the South Korean embassy from approaching the defectors. At one point, the report notes, police tussled with the embassy officials, pinning the arms of two and forcing them from school grounds.

Since 2004 roughly sixty North Koreans have sought asylum in the school, which is not protected by diplomatic immunity. Still, most have been allowed to go on to South Korea by Chinese authorities, which legally term such persons as 'economic migrants.'
Posted by Grant Montgomery at 7:18 PM No comments:

And what of North Korean refugees?

In , one can spot the North Koreans by their stunted stature, the result of growing up on inadequate diets. They often seem befuddled in banks and restaurants, and they speak Korean with a noticeable accent.

They risked their lives to get here, but even when they're assimilated they earn half of what their South Korean brethren do — for drudge work. There are 11,000 of them in , trickling in at the rate of only 2,000 a year, but increasingly they're the unwanted relatives at the doorstep.

Earlier this year, cut the initial stipend that refugees receive, with an additional [amount] for housing, adding payments at the back end if immigrants hold jobs for more than a year.

The South Korean government, which fears that any crisis with could unleash a flood of North Korean migrants, seems to be pulling up the welcome mat. Experts say is seeking to slow the stream of refugees, in order to avert a mass exodus from and ease tensions with its unpredictable neighbor.

That will leave thousands of North Koreans stranded en route in , and .

Posted by Grant Montgomery at 12:05 AM No comments: 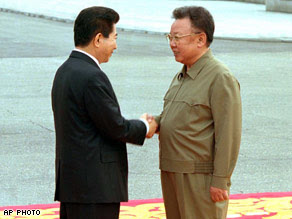 This week's summit is only the second time that leaders of North and South Korea have met since the Korean peninsula was divided after World War II.

The leaders of North and South Korea signed a pact pledging to seek a permanent peace agreement.
Posted by Grant Montgomery at 1:04 AM No comments:

A North Korean defector who had entered early this year ended her life by throwing herself from a window of a 10th-floor apartment in downtown this past month.

Kim Young-sil, 36, committed suicide in the early hours, 's Yonhap said, adding that her death came as a cold shock to some 1,000 North Korean settlers who live in the same apartment complex.

Kim had been previously repatriated back to from at least four times in her attempt to flee the starving country before she finally made it to . She was known to suffer from depression due to her post-traumatic stress from repatriation.

North Korean refugee groups in the South, however, vehemently point out that behind her death lie more fundamental problems such as the cold attitude and indifference as well as a lack of accommodative policy in for North Korean settlers, all of them acting as a trigger for her death.

[Excerpt of an article by Sunny Lee, The Asian Times]

Posted by Grant Montgomery at 12:31 AM No comments:

Another North Korean defector accepted by the U.S.

The latest refugee brings to 31 the number of North Koreans accepted in the since 2004 when U.S. President George W. Bush signed the North Korean Human Rights Act, which mandates assistance to refugees fleeing the North, according to Chun, who heads the Seoul-based missionary group Durihana Mission.

The has said it would accept about 50 North Korean defectors living in if they meet certain criteria, but the process is being delayed due to the lack of cooperation by the South Korean government, Chun said, citing an unnamed official in the U.S. State Department.

Separately, Chun said some North Korean defectors held in a Thai immigration facility complained of skin diseases as they have been staying in a cramped detention center that accommodates about 500 North Koreans — roughly twice normal capacity.

Posted by Grant Montgomery at 12:24 AM No comments: