Many Third World countries would have been driven to the wall by back-to-back years of floods and drought. North Korea, which suffered nature's disasters a decade ago, makes its problems worse with its leader's paranoid, Stalinist determination to isolate the nation from outsiders. 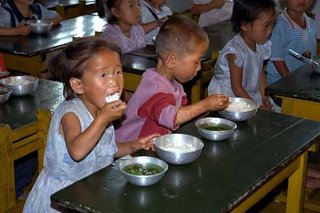 For 10 years, the United Nations' World Food Program has done what it could to limit the number of deaths by famine, providing millions of tons of food worth more than $1 billion.

When Pyongyang sometimes refused to let U.N. officials visit a province, the organization cut off the food. Its policy of "no access, no food aid" is necessary to ensure that dictators such as North Korea's Kim Jong Il don't take the milk and grain and give it to their soldiers and trusted civil servants, rather than those who need it most.

But now North Korea has forbidden private charities and the U.N. agency to deliver food.

Food aid, of course, is only part of the solution for North Korea's poverty problem.

[Excerpt of a L.A. Times editorial]
Posted by Grant Montgomery at 11:54 AM

disturbing and vile how such a fat idiot like that tyrant can go on as he does unchecked...saddens my soul