North Korean refugees in Thailand not returning to NK

Thai police have charged nearly 200 North Korean asylum seekers who were smuggled into the country with illegal entry, but will not forcibly deport them to their home country, officials said.

If the court rules that they entered illegally, they will be deported, chief of immigration police, Lt. Gen. Suwat Tumrongsiskul said. However, they will not be forced to return to North Korea and authorities will consult with humanitarian organizations to determine where they should be sent, he said.

They had entered Thailand in separate groups through the northern Thai province of Chiang Rai, and had been staying in the two-story house for the past two months. 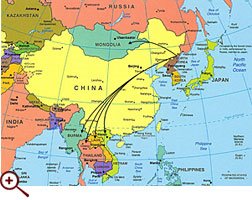 Thousands of North Koreans, facing hunger and repression in their homeland, have made their way abroad in recent years, many taking a long and risky land journey through China to arrive in Thailand, Vietnam, Cambodia and other Southeast Asian countries.

[The Korean Herald]
Posted by Grant Montgomery at 2:05 AM