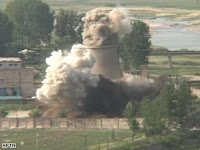 North Korea destroyed a water cooling tower at a facility where officials acknowledge they extracted plutonium to build nuclear weapons. The massive implosion, which came at about 5pm local time Friday at the Yongbyon facility, was intended to be a powerful public symbol of a move to end nuclear activities.

"This is a very significant disablement step," the U.S. envoy to North Korea, Sung Kim, said.

"This is a critical piece of equipment for the nuclear reactor," said analyst John Wolfsthal, of the Center for Strategic and International Studies, who has been following North Korea since the 1980s. "Without this facility, the reactor can't operate and can't produce more plutonium for weapons."

North Korean officials turned over to China a 60-page declaration, written in English, that details several rounds of plutonium production at the Yongbyon plant dating back to 1986. In it, North Korea acknowledges producing roughly 40 kilograms of enriched plutonium -- enough for about seven nuclear bombs, according to the U.S. State Department.

In response, Bush said he would lift some U.S. sanctions against North Korea and remove the country from the State Department's list of state sponsors of terrorism. "The United States has no illusions about the regime in Pyongyang," Bush said. "We remain deeply concerned about North Korea's human rights abuses, uranium enrichment activities, nuclear testing and proliferation, ballistic missile programs and the threat it continues to pose to South Korea and its neighbors."

Posted by Grant Montgomery at 9:48 AM