Will the real Kim Jong-il please stand up? 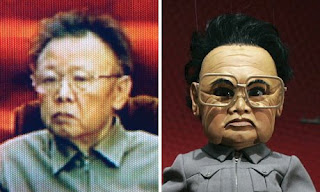 North Korean state television showed Kim (67) attending an annual meeting of parliament as it rubber-stamped his appointment to a third term as leader of isolated North Korea. Kim had been conspicuously absent from major public events which raised questions about his grip over the country's stability.

Now limping ever so slightly as he arrived to a standing ovation from fellow deputies to the 687-seat Supreme People's Assembly, he returned their applause by clapping, then motioned for them to be seated, footage broadcast on state TV showed.

Posted by Grant Montgomery at 10:18 AM