In a country as secretive as North Korea, even natural disasters are shrouded in mystery. International aid groups are struggling to determine the extent of damage caused by July's torrential rains and floods. 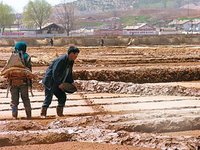 With accurate data hard to come by in the Hermit Kingdom, "we simply don't know and can't know" the extent of the fatalities, says Gerald Bourke, spokesman for the World Food Program in Beijing. Bourke has no doubt, though, that "there are a lot of hungry people" in North Korea right now.

So far Washington hasn't resumed the food aid it suspended last year. Pyongyang remains equally defiant and shows no signs of returning to talks aimed at ending its nuclear program. Unknown millions of North Koreans might be struggling to survive, but Kim Jong Il is still sitting pretty.

[TIME Asia edition]
Posted by Grant Montgomery at 1:55 AM