Demonstration at Chinese Consulate in Toronto

After arriving in for a speaking engagement at a Korean-Canadian NGO eager to advance the cause of North Korean human rights, Tim Peters of Helping Hands Korea organized a demonstration in front of the Chinese Consulate. 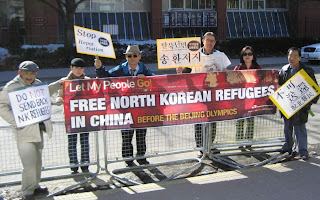 The speaking event was attended by a Senator and several MP’s who came down from to hear the presentation on the ‘underground railroad’ and the work of Helping Hands Korea.

Posted by Grant Montgomery at 1:57 PM No comments:

US to soften Pyongyang nuke demands

The US for the first time said it would ease its demands on North Korea in a bid to break a stalemate on ending Pyongyang's nuclear arms drive.

The top Asia hand at the US National Security Council, Dennis Wilder, said North Korea was not "off the hook" on fully declaring its atomic programs, but that proliferation issues would be "handled in a different manner".

The concession came as South Korean President Lee Myung-bak proposed the creation of the first liaison offices in the capitals of the two Koreas, which are technically in a state of war.

On the weapons front, US Secretary of State Condoleezza Rice, in an apparent concession to Pyongyang, indicated the entire overdue declaration might not be made public. She hinted US sanctions against North Korea could be removed even before the hardline communist state's nuclear programs or proliferations activities were verified independently.

North Korea has been pushing the US to remove it from the black list of state sponsors of terrorism. Dr Rice said the document incorporating North Korea's proliferation activities could be kept private, allowing Pyongyang to save face.

Washington is eager to see the denuclearisation drive completed before President George W. Bush leaves office in January next year. The North tested a nuclear bomb in October 2006.

Posted by Grant Montgomery at 3:31 AM No comments:

North Korea at risk of famine

may be on the brink of another famine as a result of last year's devastating floods, the worldwide increase in food prices, and a malnourished population, the United Nations warned today.

" ... faces a dire food shortage," U.N. World Food Program spokesman Paul Risley said at a news conference. "Because of high global food prices it will be very difficult for the government of DPRK to purchase food on global markets to make up the difference."

The Democratic Republic of North Korea is still recovering from a famine in the 1990s that is believed to have killed about a million people and left many children permanently stunted, according to the New York-based Human Rights Watch.

Nearly 40 percent of 's young children remain "chronically malnourished," according to a recent survey by the WFP and UNICEF. And this year, the isolated communist country is expected to see the largest harvest deficit since 2001, according to the U.N.'s Food and Agriculture Organization.

The price of rice and other staple foods has doubled over the past year.

Posted by Grant Montgomery at 3:22 PM No comments:

claims Tibetan protestors are being agitated by foreign religious elements, and so now is starting to suspect foreign connections behind any activities of which it disapproves.

Norbert Vollertsen tells us that LFNKR has received a report from staff in that any Christian church in Yanbien found to be involved with foreigners, including South Koreans, is being shut down. In addition, the punishment has been made more severe for extending help to North Korean defectors. Until recently, violators were fined, but they now face imprisonment.

LFNKR suggests that you send a letter of protest to the Chinese government. (To find the PRC embassy in your country.)

Posted by Grant Montgomery at 1:19 AM No comments:

As the Beijing Olympics draw near

As the Beijing Olympics draw near, crackdowns on Chinese human-rights activists are increasing, as well as on North Korean refugees entering . Read more

Posted by Grant Montgomery at 1:43 AM No comments:

erupted in flames surprisingly just in time to tarnish ’s impressive 2008 Olympic preparations. can never emerge as an issue without the primary western support.

is convinced that ’s economic rise is undermining its political and economic hegemony. The western rhetoric over is just a smokescreen that hides a disgustingly larger agenda that goes as far as stopping Chinese investments in African oilfields, where the Americans and the British are dazed at how the Chinese have outspent them on buying up oil concessions.

As soon as the riots erupted in , Ms. Pelosi, the first woman speaker of the U.S. House of Representatives, dashed to to meet the Dalai Lama. More nauseating was her self-righteous sermon on . “If freedom loving people throughout the world do no speak out,” she said, “we have lost all moral authority to speak on human rights anywhere in the world.” This coming from a country that stands culpable for the murder of 300,000 Iraqis in five years of brutal American occupation.

John McCain was quick to say in that “mistreatment” in was an “unacceptable conduct for a world power.”

’s former defense minister, Michael Portillo, a celebrated gay who bowed out after a scandal in the 1990s, openly asked western countries to blackmail using . In a newspaper, he came out with this headline, ‘: the West can use the Olympics as a weapon against .”

The western focus now is to push the Chinese government to make one wrong move so that Washington and other ‘allied’ governments could drag into a costly confrontation.

[Excerpt of an article by Ahmed Quraish, Global Politician]

Posted by Grant Montgomery at 11:51 PM No comments: