In October 2005 she met Kim Sang Hun—a prominent Underground-Railroad activist in Seoul who brought the case to Tim Peters. The two of them started working on the logistics of Kim's flight to freedom.

The Seoul Train is little different from any other operation where a person—a spy, say—needs to be moved out of hostile territory. A successful operation needs money, a meticulous plan and reliable people. The operatives working inside China are critical; Tim Peters and Kim Sang Hun prefer to depend on fellow Christian activists, but will work with trustworthy brokers. 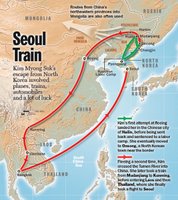 There's no magic formula for knowing how many people or how much money is needed. "It varies every time," Peters says. Nor can the route be specified in advance, though right now there are two "hot" roads out of China, one through Mongolia, another through Laos.

On Nov. 15, 2005, Kim told her mother she was ready to go. Tim Peters had raised $1,500 for the operation, and he and Kim Sang Hun had recruited four people to help. The Mongolian route was too risky in winter. One of the network's most effective activists in China is a former North Korean refugee whose son died in the snow trying to make it to a Mongolian border. So Hite, who can no longer get into China legally, would coordinate the operation from Laos.

[Excerpted from a TIME magazine article, “Running Out of the Darkness”]
continued
Posted by Grant Montgomery at 1:08 AM