Evangelical activist Robert Park, who was detained in North Korea for 43 days last year after crossing from China, has spoken for the first time on South Korean TV about the ordeal. 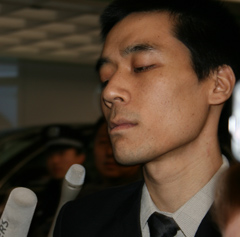 Park recalled how he crossed the Tumen River on December 25 last year, and was immediately arrested and beaten. "The scars and wounds of the things that happened to me in North Korea are too intense," he said.
He added that to prevent him from divulging the details of his detention, the security forces carried out humiliating sexual torture. "As a result of what happened to me in North Korea, I've thrown away any kind of personal desire. I will never, you know, be able to have a marriage or any kind of relationship."
Park insisted that an apology he read on North Korean TV was dictated to him.
He attempted a suicide immediately after he returned to the United States and had to be treated by a psychiatrist for seven months.
Asked why he decided to enter the North illegally armed with nothing but a Bible, he said, "I hoped through my sacrifice, that people will come together and they will liberate North Korea."
He pledged to devote the rest of his life to fighting for the demise of the North Korean regime and the human rights of North Koreans.
Chosun Ilbo
Posted by Grant Montgomery at 1:16 AM