Bloggers from South Korea's Internet community had one overriding question about the youngest son of leader Kim Jong-il: how did he get so fat when his country is starving?

Internet posts were pointed. "Pyongyang's fat pig," wrote one user, a comment which could earn a death sentence north of the border. 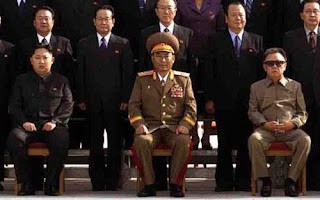 "North Korean residents are all starving to death, but what did they eat to get so fat like that?" wrote another, referring to the Kim dynasty, which has ruled the impoverished nation since its founding in 1948.

"Wow, they are huge! They should let one more fat son in and form a North Korean version of teletubbies," read another.

"What you (Jong-un) eat daily could save hundreds of your people," wrote one user.

The front-page lead of conservative newspaper Chosun Ilbo was equally scornful. Its headline read: "The only fat Prince of Pyongyang".

Founding father Kim Il-sung was portly in later life. His son and current leader Kim Jong-il sported a prominent pot belly until he lost weight dramatically following a stroke in 2008.

Kim Jong-un "takes after his grandfather Kim Il-sung but he is short and stout like his father", Yang Moo-jin, of Seoul's University of North Korean Studies, told AFP.

Meanwhile, one out of three young children in North Korea is stunted by malnutrition, the United Nations children's fund has said.


[The Telegraph]
Posted by Grant Montgomery at 10:59 AM