With roughly 80 foreign media members covering the recent historic events in North Korea - and North Korea’s own state media, in an unusual move, broadcasting live footage of the 65th anniversary of the founding of the Workers’ Party - the temporary opening has provided a rare look into the reclusive state and the new power elite within the secretive government. 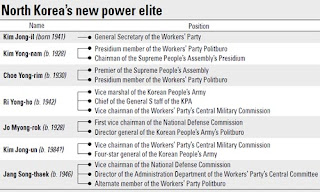 Close scrutiny of the order within North Korea’s Workers’ Party indicates that Kim Jong-un, son of North Korean leader Kim Jong-il, is currently sixth in rank in the power structure.

Kim Jong-un has been featured in North Korea’s official media eight times since his first appearance in the news at the end of last month, when he received a four-star general title along with several others, a day before a major Workers’ Party convention.
Experts said during recent reshuffles that Kim Jong-il was moving quickly to place familiar, trusted faces in the government’s top spots to make sure his son is ensured a secure position as leader.

Among the recent changes in North Korea’s government and military, one thing has not changed: the power and position of Jang Song-thaek, Jong-un’s uncle and Kim Jong-il’s “No. 2 man,” as he is often referred to.


Joongang Daily
Posted by Grant Montgomery at 2:20 AM