Daily NK: Is there a specific reason why you send prepared food or meals?

Tim Peters: Mainly to prevent the food aid from being used for other purposes. In 1996, under the Kim Young Sam administration, the only legal way to send food into North Korea was through the Red Cross. However, most of the food sent at the time did not make it to the outer regions such as Hamkyung province and Hwanghe province, but only to [the capital city] Pyongyang. The food ended up going to the ruling class and the military. 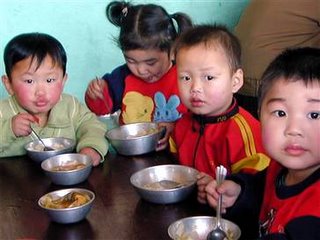 Thus Helping Hands Korea looked for other ways to provide food to the North Korea people, and decided on prepared food because for one it is only fresh and useable for a given time and so it is more inclined to be used as intended and you reduce risk of food being diverted for other purposes. There is a much higher possibility that it will reach the people directly.

Daily NK: How is this food aid distributed to the people?

Tim Peters: When I found out that food aid was being embezzled, we formed our own network by which to send food into North Korea. The network was formed around NGO activists, including myself, and Chinese of Korean descendent, as well as North Koreans who have relatives in China. This remains the basic network we use to distribute the food.

Chinese individuals of Korean descendent deliver the meals, since those with relatives in North Korea can freely travel back and forth across the North Korean border. This also allows us to monitor that the food is properly distributed inside North Korea. The relatives in China stay in touch with those in North Korea to confirm they are receiving their meals.
Posted by Grant Montgomery at 12:20 PM