Refugees who make contact with members of the Underground Railroad are brought to a safe house, where they are nursed back to health (many refugees arrive in China starved or injured), clothed and questioned about their reasons for leaving North Korea.

Railroad workers, as activists call themselves, then choose small groups of refugees to attempt a highly organized journey according to conditions and gut instinct. Before leaving, refugees are instructed how to pass as South Korean tourists in China. Most carry nothing with them.

The most popular path along the Underground Railroad runs from China’s Jilin province across the Gobi Desert to Mongolia. It is a rough, four-day trip by train, car and foot. Once refugees reach the border, they must crawl under a seven-foot barbed wire fence to reach Mongolia. Activists bribe guards along the border to ensure that the defectors will be allowed to reach the South Korean embassy in the Mongolian capitol of Ulan Bator. 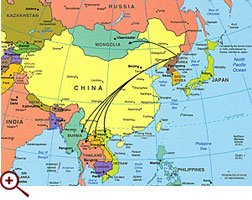 A “Southeast Asian route” has existed since 1997 but, until recent security crackdowns near the Mongolian border, was seldom used due to its long distance. It takes three to ten days to travel from the Chinese-North Korean border to Southeast China, and trains are one of the few modes of travel available. Activists may also hire drivers to ferry refugees from point to point.

Each moment of the journey out of China is a risk for the refugees and those who help them along the Underground Railroad. Anyone—including a refugee—could be a government agent sent to gather information for authorities who want to break down activist cells. Tension among refugees can also cause trouble. Safe houses have been raided because neighbors have overheard refugees arguing.

Source:: PBS
Posted by Grant Montgomery at 10:01 AM